A hint in the air of an upcoming publication in which the "Koninckites" > Clypeoceras of the Confusion Range will be assigned to the Genus Guodunites.

see this post http://ammonoidea.blogspot.com/2007/07/un-identified-ammonoids.html
Posted by Kevin at 7:38 AM No comments: 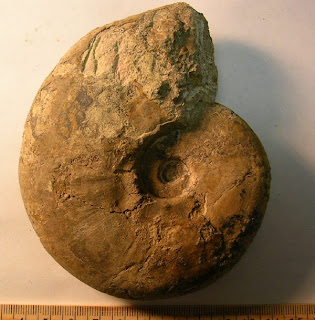 The ornamentation is exactly like Arctoceras tuberculatum, the only difference is the shape of the venter. These have an acute venter, becoming almost oxyconic in large shells and Arctoceras has a well rounded venter (almost semi-circular). This could be sexual dimorphism with the round ventered forms being female and the acute ventered forms male.

Of course there are two different sizes found in the Confusion Range, the small 100-180mm and the large 300mm, perhaps these are dimorphs of Churkites and Arctoceras isnt congeneric. 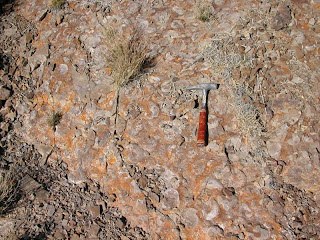 I am really starting to wonder if the Anasibirites Beds could preserve an opportunistic bloom. If the Prionitids (and not all the other ammonoids) began or found a way to prey on the micro gastropods of the time they may have had a great advantage and a large amount of food. Whether the beds in the Confusion Range preserve a mass mortality event or just the preservation of an unusually high amount of dead shells would need an answer.
An extinction at the base of the anasibirites beds, and a small climate gradient left the anasibirites beds to be very cosmopolitan. Perhaps they were just the most common ammonoid in the latest smithian so any unfavorable water or climatic condition would have killed only the anasibirites fauna.

Still so much to learn and figure out in all this.