Payday for an Amateur Paleontologist

From the Merriam-Webster Dictionary "Amateur: one who engages in a pursuit, study, science, or sport as a pastime rather than as a profession".  It don't say anything about getting paid, just about having fun or making a job out of it.  I guess that one of the greatest means of compensation someone that does this for fun can receive, and retain an amateur standing, is to have a fossil named after them.  Well, I got paid. 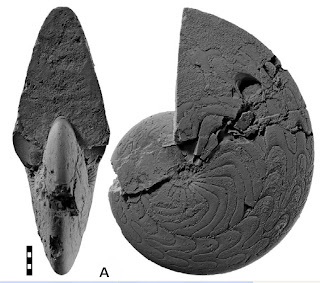 Kazakhoceras bylundi
It don't pay the mortgage or put food on the table, but that doesn't matter, that would be like getting paid to go to the amusement park.  Just the privilege of going out in the field with Dieter and Alan, spending a few days having fun, collecting and discussing the fossils, was compensation enough.
Thanks again Dieter and Alan!
KORN, D. & TITUS, A.L. 2011. Goniatites Zone (middle Mississippian) ammonoids of the Antler Foreland Basin (Nevada, Utah). Bulletin of Geosciences 86(1), 107–196 (60 figures, 37 tables, appendix). Czech Geological Survey, Prague.