A new paper just out trying to update the nomenclature and authorship of ammonoids:

It may be the latest but it won't be the last.  I'm sure that just like those back in the fifties they're getting close to something natural. This should last 70 years just like the old scheme, with plenty of differing options in the interim.
Posted by Kevin Bylund at 1:50 PM No comments: 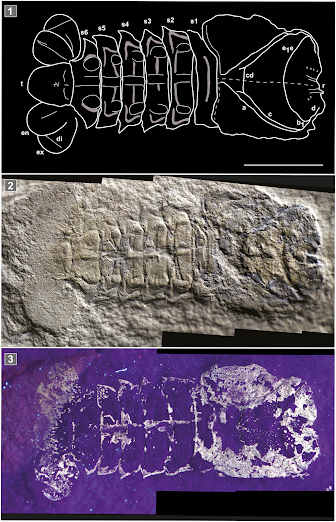 Abstract
We describe here the early Spathian (Early Triassic) Paris Biota decapod fauna from the western USA basin. This fauna contains two taxa of Aegeridae (Dendobranchiata), namely Anisaeger longirostrus n. sp. and Aeger sp. that are the oldest known representatives of their family, thus extending its temporal range by 5 Myr back into the Early Triassic. This fauna also includes two representatives of Glypheida (Pleocyemata) with Litogaster turnbullensis and Pemphix krumenackeri n. sp., confirming for the former and extending for the latter the temporal ranges of their respective superfamilies back to the Early Triassic. Overall, the Paris Biota decapods are some of the oldest known representatives of Decapoda, filling in an important gap in the evolutionary history of this group, especially during the Triassic that marks the early diversification of this clade. Additionally, we compile and provide overviews for all known Triassic decapods, which leads to the revision of four species of Middle and Late Triassic Aegeridae, and to a revised family assignment of a Middle Triassic Glypheida. Based on this refined dataset, we also investigate decapod diversity throughout the Triassic. We show that the apparent increase in decapod taxonomic richness is probably driven by the heterogeneity of the fossil record and/or sampling effort, and that the decapod alpha diversity is actually relatively high as soon as the Early Triassic and remains rather stable throughout the Triassic.

Posted by Kevin Bylund at 12:38 PM No comments: 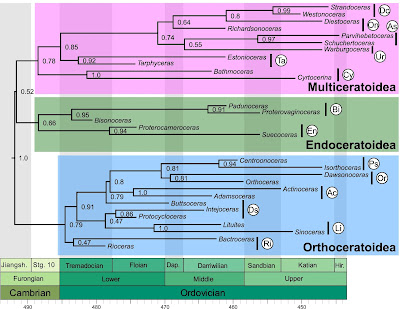 Two views of an internal mold of one of the chambers from the phragmocone of an ammonite (Prionocyclus macombi Meek 1876).  The chamber was hollow and probably filled with gas and a little liquid while the animal was alive, and was probably empty of any solids after it died.  How long it sat empty on the seafloor, and while it was being buried under sediment is unknown. Eventually, it was filled with what we have here, dark sparry calcite crystals. I imagine the crystals grew from the inner walls of the chamber towards the center until it was completely filled. You can see the siphuncle at the top of the chamber (the keel here is missing), and on the bottom, in the apertural view, you can see a notch where the keel of the preceding whorl would have fit.

Ammonites preserved in limestone or concretions are more often found this way because the surrounding shell was preserved uncrushed as the matrix around the shell hardened. Those found in sandstone or shale many times have the phragmocone and most of the chambers crushed unless the chambers were filled with sediment.

Posted by Kevin Bylund at 1:12 PM No comments:

The Canadian System (Period) as proposed by Flower (1957)

Because the Cephalopods were so different, Rousseau H. Flower wrote proposing the Canadian System with four divisions of unspecified rank (Flower 1957 p. 17).  Quoting from Flower:

"Faunally, the Canadian is relatively isolated from the Ordovician above and is characterized by stocks of its own. In the cephalopods..., the Canadian-Ordovician boundary involves changes never lower than of generic rank, and generally of the rank of families and orders."

Someone looking at only, or mostly Cephalopod fossils could see the column this way. The four divisions are areas where Flower collected cephalopods. The Cassinian from the Ft. Cassin area in Vermont, the Jeffersonian from the Adirondacks in NY, the Demingian from the Florida Mts. in New Mexico, and the Gasconadian from the Ozark Mt. area of Missouri. I don't think his later collections in Utah and Nevada changed anything.  His boundary is just above Zone K, which is basically the Hesperonomiella minor bed (e.g. Li and Droser 1999) or the base of the Whiterockian Stage of the Ordovician.

These days, the Canadian System of Flower (later referred to as the Canadian Series) has been replaced with the Ibexian Series (Ross et al., 1997) and the Lower Ordovician Series of the ICS.

Posted by Kevin Bylund at 1:57 PM No comments:

Wiping the smile off the face of the horizontal Nautiloid 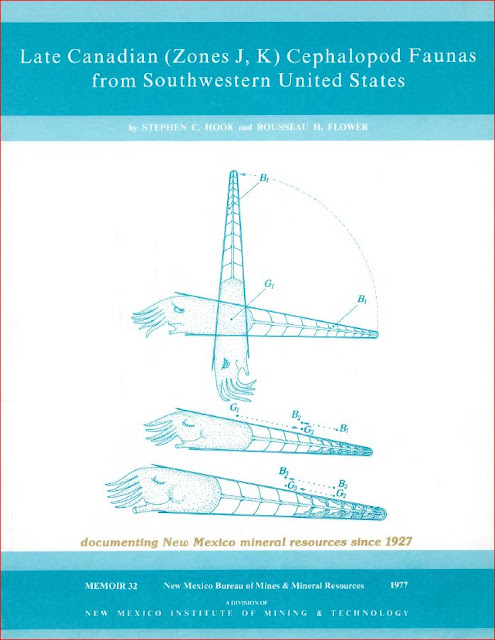 The cover of New Mexico Bureau of Mines & Mineral Resources Memoir 32 (1977), and the description from inside the front cover (below) (both used with permission from the New Mexico Bureau of Geology and Mineral Resources).  Showing the contented and smiling face of an orthoconic cephalopod with cameral (or siphonal) deposits counterweighting the gas-filled phragmocone letting it float horizontally and getting its face "out of the mud".  The non-counterweighted forms with disgusted frowns floating vertically (or about to).  I've had a smile on my face ever since first seeing this paper over 30 years ago just thinking of how happy the nautiloids on the cover were. 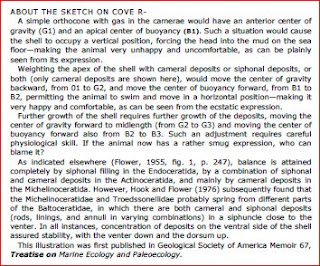 All that changed the other day when I got a copy of Peterman & Ritterbush 2021 Vertical escape tactics and movement potential of orthoconic cephalopods PeerJ 9:e11797. Which lead to: Peterman, D.J., Barton, C.C., and Yacobucci, M.M., 2019 The hydrostatics of Paleozoic ectocochleate cephalopods (Nautiloidea and Endoceratoidea) with implications for modes of life and early colonization of the pelagic zone Palaeontologia Electronica Article number: 22.2.24

Needless to say, I now have to re-arrange the thoughts of horizontal nautiloids having smiles and put the smile on the vertical nautiloid.

This might be just as hard as giving up the Geosynclinal Theory I was taught back in 1972.

Posted by Kevin Bylund at 9:21 AM No comments: 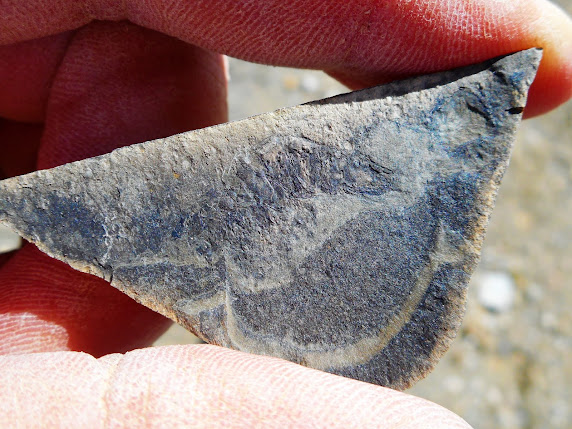 Adding to localities where fossils like those in the Paris Biota are found.

The mass extinction characterizing the Permian/Triassic boundary (PTB; ~ 252 Ma) corresponds to a major faunal shift between the Palaeozoic and the Modern evolutionary fauna. The temporal, spatial, environmental, and ecological dynamics of the associated biotic recovery remain highly debated, partly due to the scarce, or poorly-known, Early Triassic fossil record. Recently, an exceptionally complex ecosystem dated from immediately after the Smithian/Spathian boundary (~ 3 myr after the PTB) was reported: the Paris Biota (Idaho, USA). However, the spatiotemporal representativeness of this unique assemblage remained questionable as it was hitherto only reported from a single site. Here we describe three new exceptionally diverse assemblages of the same age as the Paris Biota, and a fourth younger one. They are located in Idaho and Nevada, and are taxonomic subsets of the Paris Biota. We show that the latter covered a region-wide area and persisted at least partially throughout the Spathian. The presence of a well-established marine fauna such as the Paris Biota, as soon as the early Spathian, indicates that the post-PTB biotic recovery and the installation of complex ecosystems probably took place earlier than often assumed, at least at a regional scale.

Posted by Kevin Bylund at 10:12 AM No comments:

In press, Pre-Proof Article in GEOBIOS

The late Smithian extinction represents a major event within the Early Triassic. This event generally corresponds to a succession of two and possibly three successively less diverse, cosmopolitan ammonoid assemblages, which when present, provide a robust biostratigraphic framework and precise correlations at different spatial scales. In the western USA basin, known occurrences of latest Smithian taxa are rare and until now, have only been documented from northeastern Nevada. Based on these restricted basinal occurrences, a regional zone representing the latest Smithian was postulated but not corroborated, as representative taxa had not yet been reported from outside Nevada. Here we document two new ammonoid assemblages from distant localities in northern Utah, overlying the late Smithian Anasibirites beds and characterized by the unambiguous co-occurrence of Xenoceltites subevolutus and Pseudosageceras augustum. The existence of a latest Smithian zone in the western USA basin is therefore validated, facilitating the identification of the Smithian/Spathian boundary and intra-basin correlation. This zone also correlates with the latest Smithian zone recognized from southern Tethyan basins. Additionally, these new data support other observed occurrences of Xenoceltites subevolutus throughout most of the late Smithian.

Posted by Kevin Bylund at 3:15 PM No comments: