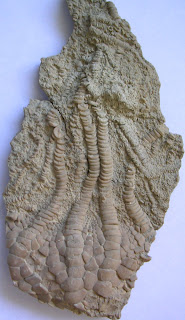 Uintacrinus from the Mancos Shale 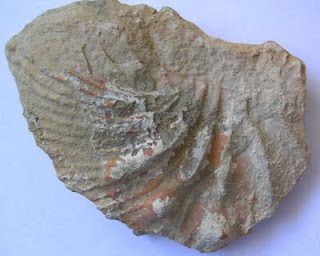 These fossils were found by Rod Scheetz (BYU Museum of Paleontology) in the Mancos Shale southeast of Green River. The small fragment he found closely matchs the one I found (see Aug. 12, 2009 post). I am now quite sure they are D. bassleri, and the small Scaphites is S. leei, from the Latest Santonian. D. bassleri has been found in the Upper Emery Sandstone northwest of Price and Northwest of Green River, so the Lower Emery Sandstone or it's equivalents are probably not present south and east of Green River as the fossils I found were in the lowest concretions above the Scaphites depressus (Latest Coniacian) beds.
REF:
Landman N. H. and Cobban W. A., 2007, Redescription of the Late Cretaceous (late Santonian) ammonite Desmoscaphites bassleri Reeside, 1927, from the Western Interior of North America. University of Wyoming, Rocky Mountain Geology, v.42, no.2, p.67-94
Posted by Kevin Bylund at 2:21 PM No comments: 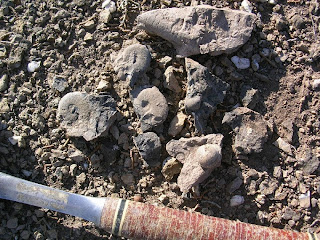 Small ammonoids and orthoconic nautiloids found in a gray limestone concretion. Probably from the Spathian part of the Formation 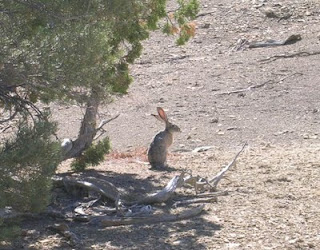 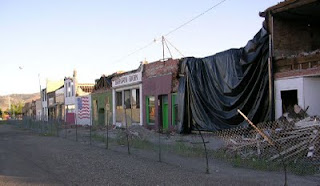 Earthquake damage in Wells, Nevada, waiting to be repaired? 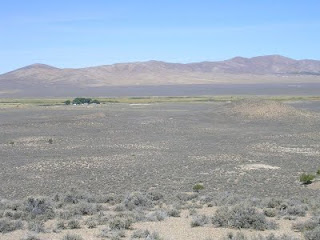 The Ranch, in the distance, and what outcrops there are in the foreground.

Outcrops of Smithian rocks were not found on this trip :(
Posted by Kevin Bylund at 9:58 PM No comments: