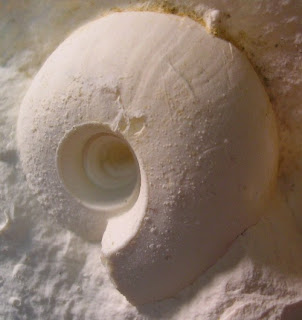 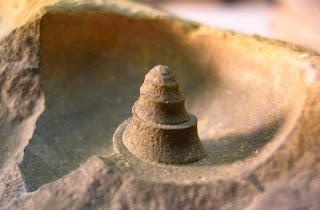 Three views of what I think now is Syngastrioceras websteri Titus 2000. The top two are latex casts of the external mold (bottom).
Posted by Kevin at 7:46 PM 1 comment:

I found a mold of either Eosyngastrioceras inexpectans or Syngastrioceras websteri in the E. girtyi zone yesterday. These two are nearly identical going by shell shape and ornamentation, the suture would really tell the story, but there are no sutures in fossils that only have external molds.
Posted by Kevin at 9:00 PM No comments: 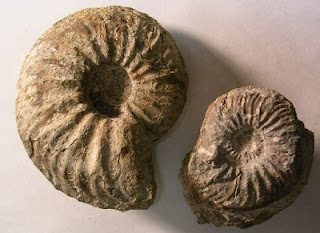 Found these Cardioceras hyatti in the Redwater Member of the Stump Formation. I had been looking for new collecting localities on Google Earth all summer, and decided to stop by on the way home from Big Wonderful this weekend, glad I did! 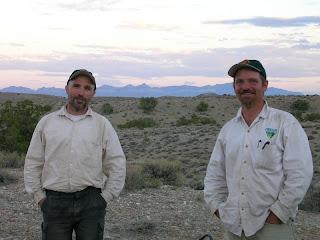 Dieter Korn on the left and Alan Titus on the right. at Granite Mt., Juab County Utah September 1, 2007
I went collecting with Dr's Alan Titus and Dieter Korn on August 30 thru Sept. 3, 2007. It just happened to be the hottest September day on record, 104 on the 2nd. Still, I had a great time and learned alot from these guys. 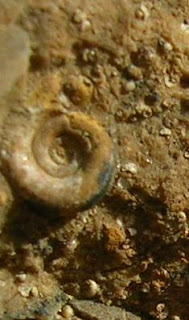 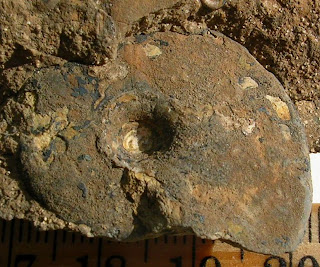 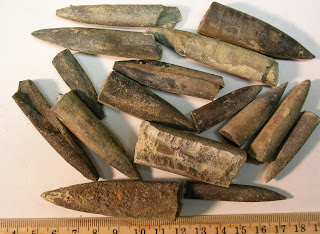 A spur of the moment trip to the Vernal area last saturday netted these Belemnite guards. All? Pachyteuthis densus from the top of the Curtis Member of the Jurassic Stump Formation. Who is the author/s of P. densus? I have "(Meek and Hayden) 1858" [I cant remember where I got that] on my website, all other references on the web just have "(Meek)" with no date.

Lucas, S. G., Krainer, K., and Milner, A. R. C., 2007, The Type Section and Age of the Timpoweap Member and Stratigraphic Nomenclature of the Triassic Moenkopi Group in Southwestern Utah, in, Lucas S. G. and Spielmann, J. A. eds. Triassic of the American West, and Science Bulletin 40 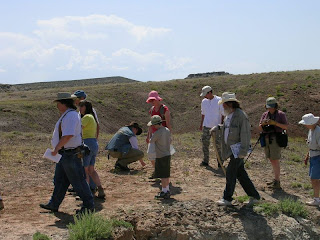 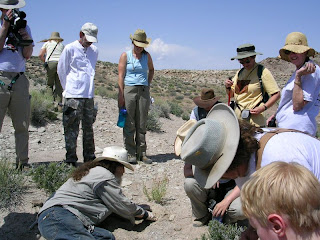 A few pics from the field trip Saturday around the Crystal Geyser Quarry. Looking thru the Cedar Mt. Formation for bones. Bob Bakker gave a very nice presentation the night before, all about bullets and dead bodies.
Posted by Kevin at 10:13 AM No comments:

Fungus Lumper
Posted by Kevin at 12:27 PM No comments: 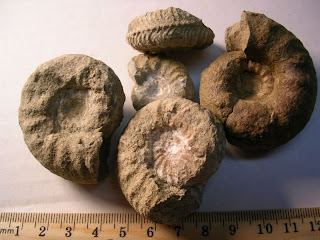 In the Jurassic Stump Formation (Oxfordian) the Cardiocerids also show alot of polymorphism. Many genera and species have been described for what is possibly just a single species.
Posted by Kevin at 6:56 AM No comments:

A list of some references for the anasibirites beds

Nützel, A. 2005. A new Early Triassic gastropod genus and the recovery of gastropods from the Permian/Triassic extinc−
tion. Acta Palaeontologica Polonica 50 (1): 19–24.


Woods A. D. and Bottjer, D. J., 2000, Distribution of Ammonoids in the Lower Triassic Union Wash Formation (Eastern California): Evidence for Paleoceanographic Conditions During Recovery from the End-Permian Mass Extinction: PALAIOS, V 15, p.535-545
Posted by Kevin at 10:29 AM No comments:

With the amount of intermediate forms between Anasibirites kingianus (Waagen) 1895, and Wasatchites perrini Mathews 1929, is it reasonable to consider them as a dimorphic/polymorphic species?


From the website: "Because of the variable morphology in some populations all specimens are a seperate species, or all are one species with variable morphology. Mathews (1929) described (a) 32 species of Anasibirites, 5 species of Gurlyeites, 9 of Hemiprionites "Goniodiscus" and 1 of Kashmirites, and (b) 4 species of Wasatchites, 3 of Kashmirites and 1 of Keyserlingites, from Cephalopod Gulch near Salt Lake City, Utah. Later workers placed alot of them (a) in synonomy with Anasibirites kingianus (Waagen) and (b) in Wasatchites. In the Anasibirites Beds (about 300mm thick) of the Confusion Range of western Utah. there are representatives of all these genera, they grade from Hemiprionites to Anasibirites to Gurleyites to Wasatchites with intermediates between each."
Silberling (in Hose and Repenning, 1959) idententified these as Anasibirites kingianus and Wasatchites meeki without reference to any intermediate forms. See the two papers by E.T. Tozer (1971 and 1994) to see how he deals with these genera.


For reference, the Santonian (Late Cretaceous) ammonite Placenticeras syrtale is a polymorphic species which has been referred to many names of many ages (Kennedy and Cobban 1991, Kennedy Landman & Cobban 2001, Kennedy, Hancock, Cobban & Landman 2004, Wolleben 1967), to find one by itself you would be unable to place it in time or one of a number of subspecies described by Wolleben. There are 2 basic morphotypes of P. syrtale, a smooth shelled form (P. planum) and an ornamented form (P. syrtale, P. guadalupae, P. pseudocostatum, P. sancarlosensis etc.) much like the forms of Anasibirites and Wasatchites. The species or subspecies of P. syrtale exist in time for about 8 my with known ancestors and descendants and those of Anasibirites and Wasatchites for maybe 1 my, and I know of no ancestors or descendants. 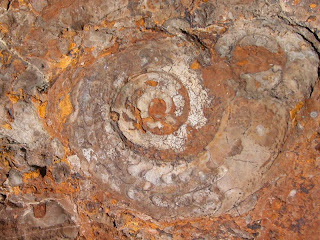 In the Anasibirites beds of the Confusion Range is a serpenticone ammonoid I refer to Wyomingites. I cannot see any constrictions on the early whorls (maybe just an artifact of preservation) so I am hesitant to refer it to Xenoceltites. Boreoceras, as figured by Dagys 1999, and the fossils in the Confusion Range look to be congeneric if not conspecific. However, the name Boreoceras is preoccupied by an Ordovician endocerid. So I guess I will keep it referred to Wyomingites until I get the whole thing clarified.

See Here for an update 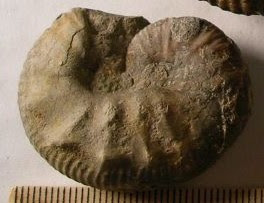 I just got a copy of this paper:

I cant figure out why Cobban et. al. only noted the new genera Cooper proposed. It seems to me to note them is to accept them.

I think I will change them on the website when I get some time. The changes would be as follows:

The species binneyi and tetonensis really dont fit in Anascaphites or Billcobbanoceras, Cooper placed them both in Anascaphites tentatively, they seem to be more like the later except the hook dont touch the phragmocone.
Posted by Kevin at 7:11 PM No comments:

The start of the ammonoidea blog. More to come.
Posted by Kevin at 12:20 PM No comments:

Email ThisBlogThis!Share to TwitterShare to FacebookShare to Pinterest
Newer Posts Home
Subscribe to: Posts (Atom)
Photos (mostly), observations and notes (occasionally), from an amateur paleontologist with an interest in cephalopods