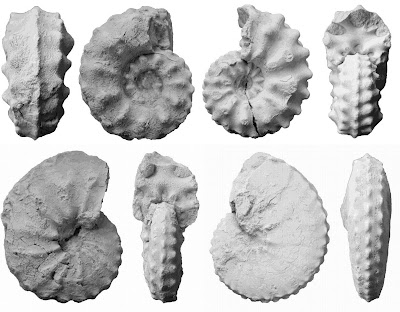 Forresteria alluaudi (Boule, Lemoine & Thevenin) 1907, from depressed, evolute, spinose to compressed, involute, almost smooth, a nice range of intraspecific variation. Is it any wonder why these, and some like these, were placed in 4 separate species in 3 separate subgenera (Reeside, 1932), Barroisiceras (Forresteria) forresteri, B. (F.) stantoni, B. (Alstadenites) sevierense, and B. (Harleites) castellense. Kennedy, Wright and Klinger (1983) put them all in synonymy with F. alluaudi.

Many ammonoids show intraspecific variation, including, for example, Placenticeras from the Cretaceous and, at least in my mind and experience, Anasibirites and Wasatchites from the Early Triassic. Found in the same bed or group of beds worldwide, to see one would tell you precisely what age the rock they were in is. Unlike the Triassic example, where there are differences in ornamentation and shape from one part of the world to another (maybe some kind of latitudinal or provincial thing), F. alluaudi is basically the same, that is different, wherever found.

Forresteria was named after the late Robert Forrester of Salt Lake City, Utah, who found the type material in southern Castle Valley, eastern Sevier County, Utah.
Posted by Kevin Bylund at 8:52 AM 7 comments: